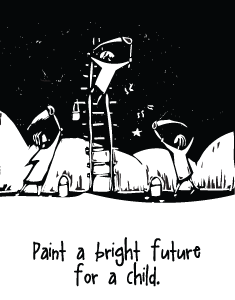 A musician, Max currently lives in Brooklyn, New York. While he was living in Mumbai between 2009-2011 and studying under the great santoor maestro, Panditji Shivkumar Sharma, he was introduced to Jana Rakshita through one of its board members and a fellow musician – Priyadarshini. The special reason was that he played the Hammered Dulcimer, a soothing instrument, similar to a harp and had years of experience playing in hospice care, as well as playing for Musicians Without Borders; a NFP that brings musicians to NYC area hospitals.

“Seven-year old Sumedha had come to Jana Rakshita for help with the treatment of a cancerous tumor in her stomach. After treatment, the tumor showed signs of improvement, but after eight months or so, there was a relapse. This time it spread to her brain, and she was diagnosed with a brain tumor. Surgery was successful, but within a month, the cancer relapsed. The cancer was shockingly aggressive, and by the time I met her, Sumedha was terminally ill.

For the next month, I met Sumedha at her home, in the hospital, and at the offices of Jana Rakshita. I played music for her and her family. We laughed together. We ate together. We talked about the treatments and the options available. The family openly shared their problems. They were exhausted, and needed a shoulder to share the burden with.
My experience with Jana Rakshita was eye opening. I got to see firsthand what it means to truly care. Beyond the financial assistance the team tries to provide, it is abundantly clear that even after the treatments are done with, the organisation has made it its sincere duty to improve the lives of the children and their families. It provides counsel and calm in an otherwise terrifying situation. Sickness, especially cancer, carries with it a negative stigma; it’s almost as if people believe it is contagious. It was highly admirable to see everyone’s level of involvement. The patients became a part of their family. Each volunteer is a true inspiration, and it is my honour to write about this incredible NGO.

After graduating in Management Studies, Rupal went on to earn a masters degree in Social Work.

Post that she worked for 4 years with NGOs including Revive Bombay Trust, Prerana and Pratham. She has been a trustee at Prerana since 2008. Today, she continues her work there along with volunteer work at several other NGOs, including Jana Rakshita.